It’s already November, can you even believe? I’m sort of excited about it finally being the end of 2019. But before we get there, we have two more Calendar Girls posts to go, starting with this one!

Calendar Girls is a monthly blog event created by Melanie at MNBernard Books and Flavia the Bibliophile and now be hosted by Katie at Never Not Reading and Adrienne at Darque Dreamer Reads.  It is designed to ignite bookish discussions among readers and was inspired by the 1961 Neil Sedaka song Calendar Girl.

This month in honor of our favorite child experiment, we’re talking about our favorite, weirdest book we’ve ever read.

So if you’re a regular follower of this blog, you know I’ve read quite a few John Irving novels. None of his will be my pick this week, but if you’re looking from some truly weird and extremely screwed up novels. That’s the way to go in my opinion. Please note that every single one of these comes with an arms long list of trigger and content warnings. If you’re interested in these books and want to know, I’ve read them all and will be happy to provide them. He is not an author for everyone, but I’ve enjoyed his books partly because they are so messed up and partly because they mostly take place in the same area I’m from.

Besides A Prayer for Owen Meany, which is my favorite novel and by fair the least messed up John Irving novel. I would recommend The World According to Garp. It’s pretty messed up but has far less incest in it than other John Irving novels, and I just really liked it. There is a movie version of this book that’s pretty good, but I don’t think is rated very high on movie sites because it’s weird AF. It has Robin Williams in it as the title character. Glenn Close plays his mom. Parts of it was filmed at the private school near where I grew up. I liked it, but I also have yet to find a John Irving novel I’ve rated below 4 stars. So I would take my recommendations there with a grain of salt.

But the book I’m choosing for this month is a book I would actually encourage everyone to read: The Hitchhikers Guide to the Galaxy 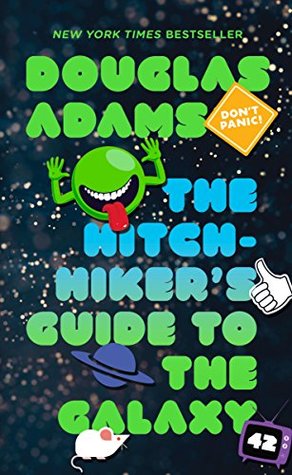 I’ve read this book three times now, the first time was in high school and I didn’t get it, and, like, really hated it. But in college quite a few of my friends read it and loved it, so I gave it a second chance. I didn’t hate it the second time, but the parts I thought were annoying, I realized was a different kind of humor that I was used to so I enjoyed it a little bit more, but it still went way over my 21-year-old head.

The third time I read it, I got it. This book isn’t really meant to be serious, but strange take on life and how seriously we take it- -that was my take away anyway. It’s absurd in a unique way. It’s kind of Welcome to Nightvale-like, with its serious delivery of ridiculous things.

There are a million fantastic quotes in this book, things you’ve probably heard a million times and if you haven’t read this book, are completely unaware that all of them are references to this, kind of legendary novel.

I highly recommend this gem of a book. I haven’t read the sequels, but I’ve heard they are just as delightful. If you’re looking for something strange, you really can’t go wrong with this one.

What’s the strangest book you’ve ever read? Comment below, or create your own Calendar Girls post to join the discussion!