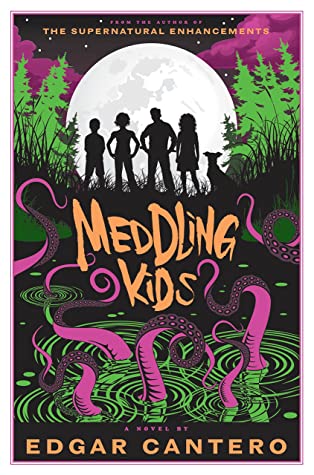 1990. The teen detectives once known as the Blyton Summer Detective Club (of Blyton Hills, a small mining town in the Zoinx River Valley in Oregon) are all grown up and haven’t seen each other since their fateful, final case in 1977. Andy, the tomboy, is twenty-five and on the run, wanted in at least two states. Kerri, one-time kid genius and budding biologist, is bartending in New York, working on a serious drinking problem. At least she’s got Tim, an excitable Weimaraner descended from the original canine member of the team. Nate, the horror nerd, has spent the last thirteen years in and out of mental health institutions, and currently resides in an asylum in Arhkam, Massachusetts. The only friend he still sees is Peter, the handsome jock turned movie star. The problem is, Peter’s been dead for years.

The time has come to uncover the source of their nightmares and return to where it all began in 1977. This time, it better not be a man in a mask. The real monsters are waiting.

I discovered this book through the year-end wrap up of Worst Best Sellers last year. It was one of the hosts favorite reads of last year, and since her and I seem to have similar tastes in books– and her hype of it– I decided to check it out.

The premise sounded super cool. What if that cartoon mystery fighting team was real, and the mysteries they solved weren’t all rich men in masks but there was something real behind it. How does knowing something didn’t happen quite the way it was written up in the paper to sound but not being able to prove it, affect the person.

This book is very clearly based on the idea of Scooby-Doo, and doesn’t shy away from it at all; from the name of the river to the makeup of the team being two boys, two girls, and a dog (even if one of the boys is dead). Personally, I like that sort of reimagining of something so familiar. I think Edgar Cantero does a great job not pigeonholing the characters into the archetypes of the characters from the cartoon but does play into how we’d picture them. When listening to this book it’s kind of hard not to picture the characters in a certain way, but the narrative was quite to point out your wrong in your assumptions and the brainy one- Kerry- has the beautiful orange hair. There are other things, but that was the biggest one and I enjoyed it.

I like the fantastical elements of this story. I did stick with the classic trope of the haunted house, but this time the thing doing the haunting and messing with the town wasn’t a guy in a mask, and honestly think this is a great book to read for Halloween. It’s just creepy enough while still holding on to the campy style.

A couple things I didn’t like: ONE the Salem Witch Trails and Witches of Salem are mentioned serval times. When they are mentioned the characters say “Burned Witches of Salem.” The Salem Witch Trails happened and are a historical event that is easily Googleable. It takes essentially no time at all and limited research to find out how the “witches” in Salem were killed. Nearly all were hung, one was crushed to death by stones and a few died in jail awaiting hanging or trail. Notice how none of those deaths were burning. It drives me nuts when the Salem Witch Trails are used in a narrative and the writer and all the editors didn’t bother to look it up and check the facts. The TV show Charmed did this same thing in its original run, and it’s the reason I’ve only seen, like six episodes. If you’re going to include a bit of history, look it up.

The other thing was the book is cut up into five chapters, which makes it hard to stop when listening to an audiobook which is more my preference than not googling a historical event before mentioning it multiple times. If you don’t want to take the effort to Google, there’s a movie that follows the fact pretty closely although it’s a bit dramatized– it stars Winona Rider and it’s actually a really good movie.

Overall, I did really enjoy this book. It hit all the right notes for me when it comes to mystery and suspense books, and I think it’s worth adding to your TBR if that’s your kind of book.