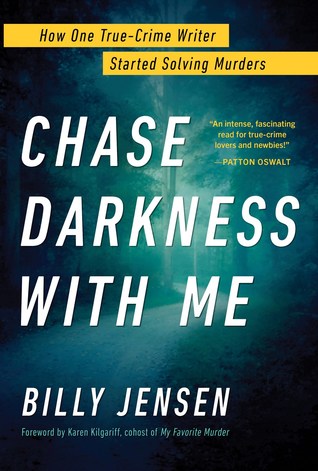 Have you ever wanted to solve a murder? Gather the clues the police overlooked. Put together the pieces. Identify the suspect.

Journalist Billy Jensen spent 15 years investigating unsolved murders, fighting for the families of victims. Every story he wrote had one thing in common – it didn’t have an ending. The killer was still out there.

But after the sudden death of a friend, crime writer Michelle McNamara, Billy became fed up. Following a dark night, he came up with a plan. A plan to investigate past the point when the cops have given up. A plan to solve the murders himself.

In Chase Darkness with Me, you’ll ride shotgun as Billy identifies the Halloween Mask Murderer, finds a missing girl in the California Redwoods, and investigates the only other murder in New York City on 9/11. You’ll hear intimate details of the hunts for two of the most terrifying serial killers in history: his friend Michelle’s pursuit of the Golden State Killer which is chronicled in I’ll Be Gone In The Dark which Billy helped finish after Michelle’s passing, and his own quest to find the murderer of the Allenstown 4 family.

And Billy gives you the tools – and the rules – to help solve murders yourself.

Gripping, complex, unforgettable, Chase Darkness with Me is an examination of the evil forces that walk among us, illustrating a novel way to catch those killers and a true-crime narrative unlike any you’ve listened to before.

I first became familiar with Billy Jensen through Michelle McNamara’s I’ll be Gone in the Dark (Which is a haunting a nearly perfect true crime book if you haven’t read it.) He was one of the people who helped finish it after Michelle’s untimely death in 2016. Then through podcasts like My Favorite Murder, and eventually the Podcast he does with Paul Holes (The Murder Squad) I learned more about what Billy does with his social media campaigns to solve stranger murders and the great work he does there. All of this made me extremely interested in reading his book, and honestly, it was incredibly informative while also being heart-breaking at times.

Like most of my favorite true crime books, The Stranger Beside me, the aforementioned I’ll Be Gone in the Dark, this book, balances between memoir and true crime. We learn Billy’s life story and how he got into true crime growing up on Long Island in the 70s. He talks about one of his early memories being his father showing him the headline after Son of Sam was captured. I loved the parts were Billy talked about his dad. True crime and cold/unsolved cases can be tough, but you can feel how much Billy loves his father as he reads the book to you and I loved it so much. His early stories have that feeling of an evergreen story, so many true crime people have a similar tale about how they got into wanting to learn about a possibly solve crimes. the memoir part of this book was extremely good and gave that little bit of light you need in a true-crime book.

A good amount of the book talks about Michelle McNamara her hunt for the Golden State Killer and her book. He discusses finding out they caught the guy and there’s an almost stream of consciousness section where Billy talks about his feelings and what those few hours wide awake in a hotel room in Chicago was like. I remember that day and how big it was for true crime people and especially how big it was for people who knew Michelle’s work and how much she put into finding this guy. It was heart-breaking but also so joyful to hear Billy talk about it.

There was also a section of the book where Billy discusses a case that, since the audiobook was released, has been mostly solved. It’s a case that I know a lot about because I’m from the area where it happened. The Bear Brook Murders or the Allenstown Four case. This case is– for lack of a better term– WILD. I HIGHLY recommend checking out the podcast Bear Brook by Jason Moon and NHPR, it’s a deep dive into this case that crisscrosses the country and weirdly enough envolved former detective Paul Holes. It includes updates that happened after this book was published. When Billy was writing this book, authorities were still trying to find out who the woman and girls in the barrels were, and right now we know three of their names. The middle girl remains unidentified.

But for the most part, this book discusses how Billy uses social media– mostly facebook– to solve crime. It’s a very interesting and cool way to basically crowdsource crime-solving. Billy has a bunch of rules that everyone should follow when doing this — like ask permission so you don’t screw up an ongoing investigation–  and this technique has worked multiple times.

Overall, I think this book is fantastic, especially when talking about 21st-century detective work. I definitely think it’s worth picking up if you’re into true-crime. There’s a lot of good crime stories about murders that don’t get a lot of media play, as well as a discussion on two huge crime stories of the last few years (or, well, the last 40 to be honest since both the Bear Brook Murders and the Golden State Killer are cold cases.). Pick this one up if you’ve ever hoped you could solve a crime, you may pick up some good tips.

What are your favorite true-crime books? Please tell me I need more to read, thank you.

Until Next time Internet,

One thought on “Chase Darkness with Me by Billy Jensen”