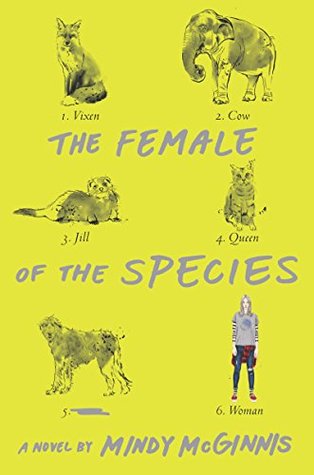 Alex Craft knows how to kill someone. And she doesn’t feel bad about it.

Three years ago, when her older sister, Anna, was murdered and the killer walked free, Alex uncaged the language she knows best—the language of violence. While her own crime goes unpunished, Alex knows she can’t be trusted among other people. Not with Jack, the star athlete who wants to really know her but still feels guilty over the role he played the night Anna’s body was discovered. And not with Peekay, the preacher’s kid with a defiant streak who befriends Alex while they volunteer at an animal shelter. Not anyone.

As their senior year unfolds, Alex’s darker nature breaks out, setting these three teens on a collision course that will change their lives forever.

This book was intense. I was drawn in from the start. It probably says a little too much about me that 5 of my first 8 reads of 2019 are about murder — and murder involving children to boot– but I’m really into these kinds of stories and I like unwrapping the mystery and characters of books with these kinds of themes.

This was my first Mindy McGinnis book, and from the looks of things, this is contemporary isn’t what she usually writes, but I’m definitely looking into her other books int he future. The world and the characters she creates in this book come across so well that I can only imagine what that kind of world building would look like in her other books (according to her Goodreads reviews all her books appear excellent).

I think this book captures different girls well. I find the character of Branley an example of showing as many different “kinds” of girls as possible. Branley is that mean girl style archetype that we see a lot in YA books, she’s a sexual being and uses it to her advantage to get what she wants, but we see different pieces of her through the eyes of all three narrators that shows she’s more than just her short dresses and make-up. We see all three of the girls in the story use the thing they have that’s different from everyone else to get an advantage. Peekay gets away with things because she’s the preacher’s kid, Alex because she’s the sister of the dead girl.

Although this book deals with more adult themes than many YA books, and I think this is the kind of book that can teach a lot. This book deals with sexual assault and rape culture, discussing it frankly and in your face from essentially the first page. That’s another reason I think the character of Branley is so important.

This was a great book. I would definitely recommend it, but keep in mind that it’s geared toward a more mature YA audience and deals with Sexual assault, murder, and rape in a very frank way. This book doesn’t hide what it is in metaphor, and it’s better for it.