Welcome, I’ve been thinking for a while now that I should have a part of my blog where I discuss something that I spend a great deal of time listening and reading about, and that topic is murder. I read a lot of books and listen to a lot of Podcasts about murder. I like true crime. So, because this is my blog and I can do what I want, I’m starting semi-regular posts about true crime books I’ve read. We are starting with the part true crime book part memoir by Alexandria Marzano-Lesnevich The Fact of a Body: A Murder and a Memoir.

**** This book talks about the murder of a child and other triggering topics. It’s not for everyone, and neither is this blog post.**** 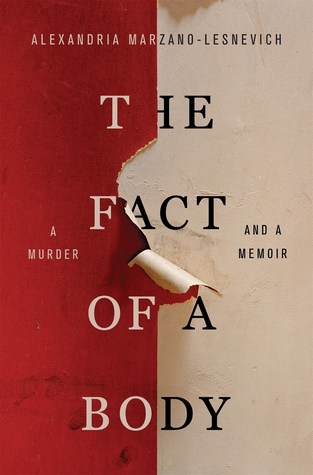 This book is a lot. It’s heavy and at some places hard to read, but I think that’s the overall point of it. It starts with the story of a woman waiting for a train, who through a series of unfortunate events is possibly injured by a falling scale after a man drops a bundle of fireworks because he’s late for the train. It’s famous case studied by law students about liability: who’s at fault here? Is it the train company? The man with the fireworks? The guy who pushed the man with the fireworks onto the train? In reading this opening, I thought this book was going to end up being a book about where to place blame. Fortunately, for the most part, it wasn’t. Marzano-Lesnevich places the blame for the murder of this six-year-old boy firmly on the douche who murdered him.

Sometimes in cases like this, there are people who put the blame on the judicial system, and sometimes the system does fail and gives rapists, and violent people light (nearly stupid) sentences and they are out on the street in 3 months or 3 years. Off the top of my head, I can think of two serial murders who became serial murders after they were released from jail for murdering family members after serving 10 or fewer years. Some liability can be placed on the system for not seeing what these men could be, but they also aren’t fortune tellers.

In this case, the murderer served time in Georgia. He told the people letting him out of jail that he should probably stay in jail. The world probably would be a better place if things like that were allowed, but they aren’t. So he got out of jail, went back to live in his home town in Louisiana and he murdered a small child. Marzano-Lesnevich takes a lot of time telling this man’s story. She talks about his family before he was born, the tragic set of circumstances that led to his birth, which– for real– if you’re into true crime books and can stomach cases like this one, reading the story of this man’s family is so messed up it’s worth reading the book for.  However, his messed up family life does not justify or explain the why in this story.

There is a second story inside this story, and that is the one of Marzano-Lesnevich’s childhood and how she got involved in this case. What drew her to it. With every one of us, there is a case that drew us into true crime. Whether it’s the Chrismas murder or 6 year-old-girl or a famous former football player who murdered his wife. Sometimes its something that happened in our hometowns. Sometimes our mom’s just really loved Law and Order and Ann Rule books, and you got into true crime by osmosis.

In the memoir section of this book, Marzano-Lesnevich talks about how she was a victim of molestation by a family member.  It’s her story of wanting to be a lawyer and getting an internship in Louisana for a firm that had just worked the retrial of the murderer in the other part of the book. Marzano-Lesnevich’s story is compelling, sort of the opposite of the murder’s. Terrible things happened to her as well, she’s sitting on the other side of the glass talking to the murderer.

What I enjoyed most about the memoir part, was it felt like Marzano-Lesnevich was saying “terrible things can happen, but you can still become everything you wanted, and may even more.” We are the cause of our actions. We choose what happens to us. I think that’s an important thing to take away. Especially after spending 300 pages in these horrible things that happened to children and reading about a man who tried so hard blame his actions on external forces. And you know, after reading about his life, there were spots where maybe if someone had listened a little more, he could have gotten help, but that doesn’t negate that fact that he hid the dead body of six-year-old boy in his closet and while the rest of the neighborhood looked of him, he let the neighborhood children play on the floor of his room. It doesn’t change that a handful of minutes after the murder he looked that little boy’s mom in the face told her he hadn’t seen her and let her in to use the phone to call the police to report him missing.

In closing, I found this book incredible. I enjoyed both narratives as much as someone can enjoy this topic. I think a true crime person would enjoy this book. It’s an interesting case that has a conclusion. It’s well done.