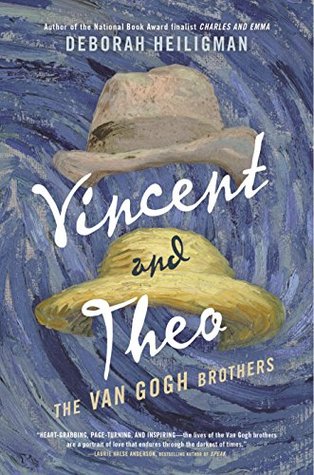 The deep and enduring friendship between Vincent and Theo Van Gogh shaped both brothers’ lives. Confidant, champion, sympathizer, friend, Theo supported Vincent as he struggled to find his path in life. They shared everything, swapping stories of lovers and friends, successes and disappointments, dreams and ambitions. Meticulously researched, drawing on the 658 letters Vincent wrote to Theo during his lifetime, Deborah Heiligman weaves a tale of two lives intertwined and the love of the Van Gogh brothers.

(There are history spoilers contained in this review)

So many of the things I’ve read or listened to about Vincent Van Gogh were about his mental illness and less about his actual life– even, to a point, the beautiful Doctor Who episode Vincent and the Doctor. The idea that this book didn’t, is what drew me toward it. Somehow, although Theo was such a huge part of his life, I didn’t know the story of Theo and I found this book to be different is all the right ways when it came to learning about Vincent and his work.

You all know that I’m a bit of a sucker for a book about two people who love each other, this is one of those books, yet this love is the kind of familial love I think all of us want in a way. I think there was some serious co-pendency going on for a bit, but the way their relationship was presented in the book painted a loving portrait of two brothers on opposite sides of the same coin.

I listened to the audiobook, which is how I prefer to read history books and biographies, usually because they are long and not all of it is super interesting, but I do wish I had read the physical book for this one. I felt like I was missing the paintings being described–but this is why the internet exists, and Wikipedia is amazing.

I found the description Deborah Heiligman gives of these two paintings, in particular, showed the relationship between these two brothers. The book was great a showing the dynamic, how the two played off each other, feed off each other’s energies. Theo the art seller and Vincent the art maker.

In the end, this book is tragic. I think most people reading it know that it wasn’t going to end happily. I learned in middle school art class about Vincent Van Gogh’s tragic life and how mental illness took him to a place he couldn’t escape– the Doctor Who episode does a lovely job reconciling this tragedy as well. I highly recommend this episode of Doctor Who, you really only need a simple knowledge of the show to understand what’s happening in the start. It’s my favorite episode with the 11th Doctor.

But the end of Theo’s life is just as heart-breaking. He died less than a year after Vincent, himself going mad due to a different kind of illness that ate away at his brain for years. Listening to the final chapters of this book, Theo’s last months, the doctors’ reports and letters written between Theo’s wife and the Van Gogh’s were extremely well written and crushing to hear. However, there was a little bit of light at the end of the dark place. As we learn what happened to the rest of the Van Gogh siblings, and Theo’s family we learn that years after his death, he was moved to occupy the plot next to where Vincent was buried. And now they lay side by side, as they were in so much of their life.

Overall, I thought this book was lovely, the language and style drew me into the story. The chapters were also very short for the most part which is something I enjoy in a physical book but can be awkward in an audiobook. I loved the narrator and would recommend this book to anyone interested in learning about Vincent Van Gogh. Of the, admittedly limited, things I have read or listened to about Vincent, this I think covered the most and discussed more parts of his life than other things.

Until next time, Internet

One thought on “Vincent and Theo: The Van Gogh Brothers”