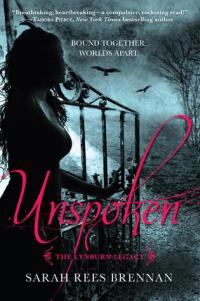 Kami Glass loves someone she’s never met… a boy she’s talked to in her head ever since she was born. She wasn’t silent about her imaginary friend during her childhood, and is thus a bit of an outsider in her sleepy English town of Sorry-in-the-Vale. Still, Kami hasn’t suffered too much from not fitting in. She has a best friend, runs the school newspaper, and is only occasionally caught talking to herself. Her life is in order, just the way she likes it, despite the voice in her head.

But all that changes when the Lynburns return.

The Lynburn family has owned the spectacular and sinister manor that overlooks Sorry-in-the-Vale for centuries. The mysterious twin sisters who abandoned their ancestral home a generation ago are back, along with their teenage sons, Jared and Ash, one of whom is eerily familiar to Kami. Kami is not one to shy away from the unknown—in fact, she’s determined to find answers for all the questions Sorry-in-the-Vale is suddenly posing. Who is responsible for the bloody deeds in the depths of the woods? What is her own mother hiding? And now that her imaginary friend has become a real boy, does she still love him? Does she hate him? Can she trust him?

So, fun story about me. I have a terrible habit of calling famous people I follow on Twitter and Facebook “my friend.” In no person am I guiltier of doing this than Jared Padalecki from Supernatural. In the last few years I have said “My Friend Jared” and then talked about the Always Keep Fighting Campain as if a person I actually know was involved in it. I’ve been called out many a time. One memorable one being my mother saying to me “You don’t know anyone named Jared.”

So I feel a weird connection to Kami. I  have never talked to other people in my head or heard other people’s thoughts, but still. I felt an understanding with Kami.

There were parts of this book that I felt didn’t exactly make sense. I felt that Holly and Angela accepted Kami’s explanation that flesh and blood Jared standing in front of them is the same Jared that Kami’s been talking to in her head too easily. I also felt the romances were a little forced. But overall I enjoyed this novel.

There’s a lot going on in this book, murder, magic, mystery, people that can read one other person’s mind, animal sacrifice, breaking and entering. And for the most part, it’s laid out pretty straightforwardly. I feel like some of the dialogue is wonky, but I think it may be a “language barrier” between American English and British English. There are parts of Harry Potter dialogue that still make no sense to me.

This is a good modern Gothic novel, which after reading some Victorian Gothic novels, I enjoyed seeing how those themes aged through time. I liked those elements that I’ve seen in Jane Eyre and Wuthering Heights in a brand new story. Even my least favorite element, Cousin Marriage, survived. Stop marrying your first cousins. I have seen so much cousin marriage in media the last few months it’s getting a little weird. Everywhere I look COUSIN MARRIAGE.

I like the mystery, the who and why. I think it’ll be an interesting series as I continue reading it. I think there is a lot to explore. The history of the town and Lynburns is going to be interesting as it continues to unfold. I recommend this novel to people looking for something a little creepy and odd. It was a fun quick read.

Have you read any of The Lynburn Legacy? What did you think?

Until next time Internet

One thought on “Review- Unspoekn by Sarah Rees Brennan”